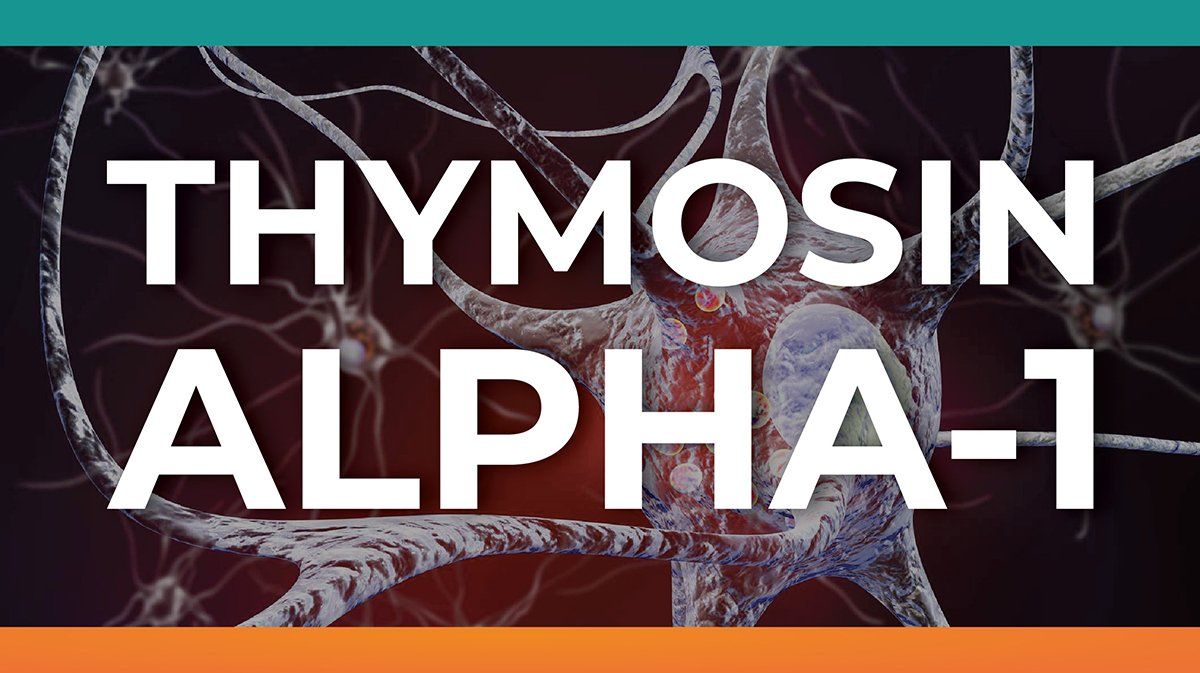 In order for our immune system to fully protect us, it needs to be able to maintain balance. Too strong or too weak of an immune response can manifest any manner of disease and dysfunction. How this internal balance is struck involves an incredibly complex network of organs, cells, hormones, growth factors, minerals, amino acids, neurotransmitters, vitamins, and antioxidants, along countless other teammates that together form the barrier between you and the outside world. This intricate system relies upon you to support it by getting enough sleep, reducing stress, eating a diet that is actually full of nutrients, and by building your resilience through exercise.

Thymosin Alpha is an Option

If you are already living a healthy lifestyle, and you’re seeking to further enhance how your immune system can function, you may want to consider a clinically proven tool from the fascinating field of peptides: the biological response modifier (BRM) thymosin ɑ1 or TA1. Peptides are fundamentally changing the way we can approach chronic disease, hormonal insufficiencies, cognitive disorders, infections, and even the root causes of aging. By using highly specific substances like peptides which are created naturally in the body, we are able to avoid the unwanted side effects that are the major drawback to modern pharmaceuticals. TA1 seems to be an especially effective peptide that has shown promise through testing in both animals and in humans, as well as the lab and in the clinic, and has been shown to have less side effects than placebo in some research.

Thymosin Alpha-1 is a peptide, derived from a protein found in human thymus glands called prothymosin alpha. Consisting of 28 amino acids, TA1 was originally isolated from thymus tissue way back in the 1970’s and its potential for modulating the immune system, inhibiting cancer growth, calming autoimmune disorders, controlling infectious disease, and much more has been studied extensively ever since. Currently, TA1 seems to be painfully underutilized in a healthcare system that concentrates on treating symptoms rather than their root cause. This allopathic or symptoms-focused approach to “healing” is approaching an eventual shift in the public’s paradigm that will call for more individualized approaches to treating and eliminating chronic disease by utilizing tools such as peptides and other modalities. TA1 opens many doors for supporting and improving immune function by acting on immune cells, modulating inflammation, influencing genetic expression and transcription factors, and so much more. All this sounds very technical, but in reality TA1 was discovered due to research investigating a very obvious avenue to approach for immune system enhancement.

What is Thymosin ɑ1 and How Does it Work?

If you can remember back to your high school anatomy days, you likely recall that the thymus gland is essential for both immune and endocrine function – more specifically for the development, maturation, and education of T cells who are our little immune warriors and crucial for our ability to adapt to and overcome specific pathogens. If any of this jogs your memory, you are also probably aware of the fact that, after puberty, your thymus gland begins to atrophy or wither away in a process known as involution. Although the T cells that your once-robust thymus produced still remain effective, the actual gland itself becomes but a shell of what it once was – in fact, it was once considered to be a vestigial organ in adults, although it does still remain somewhat active throughout life.

Research in animals that were missing a thymus gland found that reintroducing thymosin fraction 5 (TF5, the origin of TA1) was able to enhance immune function. Thus, the next logical step would be to isolate the active section or functional component of TF5 of this protein (a.k.a the peptide fragment: TA1) and begin testing. As the research progressed, scientists began to identify the mechanisms by which TA1 can impact overall immune function, some of the potential benefits for individuals suffering from things like cancer and hepatitis, how it might prevent the escalation of infection, and much more.

How Does it Work?

To understand how TA1 can influence the immune system, it is important to understand some of the key players that regulate immunity. These include cytokines, chemokines, thymosins, growth factors, and various endogenous antioxidants and other compounds. Each of these unique compounds are dubbed “biological response modifiers” (BRMs) due to their ability to either enhance or inhibit immune system function – depending upon what is required at any given time. In many cases, the use of TA1 or another BRM has been proven extremely effective in combination with conventional therapies and may increase the efficacy of treatment, decrease mortality, and lower morbidity when compared to any single treatment alone. In addition to modulating the immune system, TA1 can influence both the central nervous system and endocrine system, a rather unique ability even in the fascinating realm of peptides. TA1 may also be able to enhance immune system function by:

This broad list of mechanisms, and a complete lack of side effects is only part of the reason that TA1 is such an incredibly promising addition to standard treatments for autoimmune disorders, infections, viral disease, cancer, and more.

What Has Been Proven Thus Far?

Research has consistently proven TA1 to be effective at improving immune response and stopping the progression of many viral, bacterial, and fungal infections. Although a lot of the current research has been done in animal models (funding for peptides is relatively scarce), TA1 has been FDA approved since 1985 (it’s the active ingredient in brand name Zadaxin) and it is commonly used in 35 countries for the treatment of multiple forms of hepatitis and cancer. What seems to be precisely a ton of preclinical and clinical trials (a PubMed search yields over 700 studies) have investigated TA1 and a significant number of them have deemed this awesome peptide effective at treating other human viral diseases besides just hepatitis including those caused by cytomegalovirus, influenza, and various other disease states owed to microbes. TA1 may also increase the ability of immune-compromised individuals to respond favorably to vaccinations.

One of the even more intriguing effects of TA1 however, involves its ability to vastly improve the outcome of individuals suffering from sepsis, severe sepsis, and septic shock. According to the Sepsis Alliance, sepsis is the leading cause of death in hospitals. This reign may hopefully end someday, as research is showing that combining TA1 with some more conventional antimicrobial strategies may be the key to making death from sepsis a far less likely occurrence. One study published in the Chinese Journal of Critical Care found that by adding the TA1 peptide to a standard sepsis treatment, survivability was improved significantly (86% vs. 58%) compared to the standard treatment only group. Not only that, but the TA1 group spent significantly less time on mechanical ventilation. Similar findings were reported by another study that consisted of 342 patients – basically, TA1 has plenty of research behind it that all points to the same conclusion: thymosin ɑ1 can increase our odds of overcoming the downhill slide that is the progression from infection to septic shock and death. Dig into the non-sepsis related research and you will find that TA1 has been utilized as part of the successful treatment of acute respiratory distress syndrome (ARDS), severe acute respiratory syndrome (SARS), AIDS, pneumonia, and as we already mentioned, hepatitis and different forms of cancer. TA1 is able to have such profound effects because it helps to maintain the fundamental balance that is required for optimal immune function. It not only increases the effectiveness of your immune cells, but it also acts directly on target cells – making them more visible to the immune system.

The burgeoning field of peptides is only beginning to become more widely accepted, as it becomes more understood. Thymosin ɑ1 stands out so much that the co-founder and vice president of Tailor Made Compounding (one of only a few compounding pharmacies that has the ability to create actually effective peptides) considers it to be one of his favorite peptides, and there are a lot of peptides. He has utilized it to help patients with certain kinds of herpes, Lyme disease, at the onset of flus and colds, autoimmune issues, and for general anti-aging purposes as well the obvious indications like hepatitis, as a vaccine adjuvant, and for some forms of cancer. It is genuinely difficult to find another intervention that has the ability to so positively impact your immune function and overall health. TA1 will almost certainly be part of most people’s health and wellness protocols in the future, as well as part of standard care for seriously deadly issues like sepsis, cancer, and more. Ikon Health is thankful to be able to offer Thymosin to our customers and clients as an incredibly effective and safe means to enhance immune system function, and generally improve health. Although we have already preached this, it is important to note that TA1 won’t be effective at supporting immunity unless you are also taking care of (at least most) of the fundamentals for immune health: