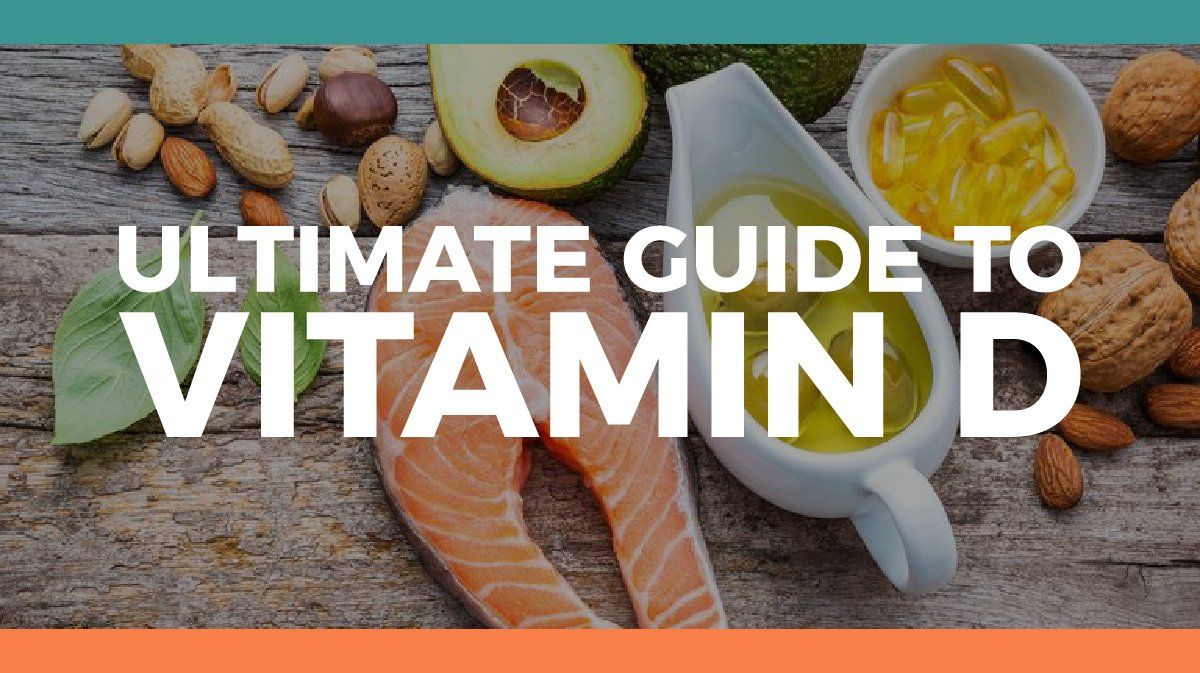 The Ultimate Guide to Vitamin D

When you take a hard look at the list of potential benefits vitamin D can provide, you might quickly realize they are really just a perfect example of the powers of genetic expression.

Nearly all of the power that vitamin D wields comes from its ability to influence what is known as the expression of your DNA. This influence over how your genes are expressed comes from the choices you make (or don’t make) in the realms of nutrition, training, and lifestyle. Being protective of your vitamin D status should be near the top of your health priority list – along with getting enough quality sleep, adequate movement, and nutrition as a whole. You might be wondering why vitamin D deserves to be mentioned with three major pillars of health and wellness. To understand vitamin D’s VIP status, it’s best to start with the importance of micronutrients altogether – there are roughly 40 of them on the essentials list. All of which we must get from our diet in order to survive, let alone thrive. After that we can shift the focus of our conversation to vitamin D in particular and highlight some fascinating research that illuminates just how important it is. There will also be some clues on how to determine if you may be at risk for a deficiency, and how to bring your levels up to what is known as the “sweet spot” for long term health.

The importance of micronutrients in general cannot be overemphasized, and vitamin D is one that should be given an even higher priority than most in your nutrition plan.

Collectively, micronutrients are a family of roughly 40 vitamins, minerals, essential fatty acids, and amino acids that we require for stuff in our body to work properly.

Nearly every biochemical process (there are a lot) within us requires some sort of micronutrient to function optimally. We may not feel a deficiency right away, in fact many people live years with suboptimal levels of many micronutrients. Our modern diets tend to be devoid of most micronutrients, although it is possible to get everything you need from whole foods – if you work hard enough at it. Another factor limiting our nutrient intake is the fact that certain classes of micronutrients are more readily absorbed by humans than others.

Vitamins for instance, are divided into water-soluble and fat-soluble varieties. Those that are fat-soluble require fat to be eaten with them in order to be absorbed effectively.

This is just an example of one potential reason why Americans are generally suffering from an insidious depletion of most micronutrients – even if they are getting all their fruits and veggies. For example, in the United States…

Each of these missing micronutrients has countless roles to play throughout the human body, and when you are not getting enough of one, your body uses whatever you do have for tasks that are required for immediate survival. Long-term tasks such as DNA repair, that will take years to develop into dysfunction, are placed on the back-burner – a phenomenon known as the “triage effect”.

So what is that makes vitamin D so special among this list of these already important building blocks of health we call micronutrients?

Vitamin D is so important, that we’re able to make it from the sun’s UVB rays. Once created from UVB rays, it is converted to what is known as vitamin D3 (if supplementing, you should be getting it already in D3 form). Once in D3 form, it is converted by the liver to 25-hydroxyvitamin D. From there it is converted once more in the kidneys to what is known as the active form or 1,25-hydroxyvitamin D (this is what they test the levels of in your blood). Once in this form, vitamin D is able to do its work all around the body as a steroid hormone. Steroid hormones have the ability to regulate the expression of genes within our DNA – essentially turning them on or off. Flipping this switch results in various downstream effects controlled by that particular gene.

Another profound effect that inadequate vitamin D levels can have on our body and mind is through production of a key neurotransmitter called serotonin. Vitamin D can be thought of as a rate limiter for serotonin production in the body. It acts as a cofactor for the enzyme known as tryptophan hydroxylase. This enzyme is required for the production of serotonin thus, vitamin D is required for you to produce enough serotonin for normal cognitive function.

Serotonin production isn’t the only function of vitamin D that may convince you to prioritize supplementation to maintain adequate levels within your blood. Vitamin D levels have also been directly correlated with modulation of the aging process.

Vitamin D has been shown to slow shortening of your telomeres, one of our closest markers of actual biological aging. Telomeres are the little caps at the end of strands of DNA which protect it from damage and subsequent mutations. On average, the older we get, the shorter our telomeres become. In one study involving thousands of female twins, those with the lowest levels of vitamin D also had the shortest telomeres. Another important finding of this study was that more is not better with vitamin D. Those in the study that had the highest vitamin D levels (exceeding the suggested range of 40 to 60 ng/ml) also had markedly shorter telomeres. This is why it’s important to fall within the vitamin D  “sweet spot” of 40 to 60 ng/ml. There are countless more reasons why it’s crucial to try and hit this sweet spot for vitamin D – inadequate levels have been linked to

You may be asking how you might be able to determine if you are deficient in vitamin D.

Currently, the gold standard of determining if you are deficient in vitamin D is a blood test – preferably done before beginning supplementation to determine your baseline levels. If you do not have access to a blood test, there are a few risk factors that may help you determine if you are susceptible to a D deficiency. Those that are especially at risk of deficiency include overweight individuals (because D is a fat soluble vitamin, it will be absorbed and essentially held hostage by fat cells), as well as the advanced age population (the older we get the less D we are able to make from the sun). Also at risk are people living in more northern latitudes (especially during the winter when sun exposure is limited), and people with a darker complexion (the skin pigment melanin acts as a natural sun block). Once you have determined whether or not you may be deficient, or if you are seeking to optimize your current levels, there are a variety of ways in which you can increase your vitamin D.

How to Get Your Vitamin D Levels Up

Current mainstream recommendations for daily vitamin D intake seem to be extremely low. Research has shown that taking 4,000 IU of vitamin D3 a day was enough to bring deficient individuals up to a level sufficient for normal physiological function. Notice that this number is far above the RDA laid out by the government, so please don’t be shy and go get your levels monitored by a medical professional. When choosing a supplement, opt for the D3 version rather than the D2 version whenever possible. This is because the D2 version is not as easily converted by most people to the active form of vitamin D within the body. Sun exposure is also a fantastic way to raise vitamin D levels within the body – provided you live in a location that receives adequate UVB radiation, and you are exposed to the sun for sufficient amount of time.

Unfortunately there aren’t many foods that have significant amounts of vitamin D other than some fish, algae, mushrooms, and fortified food products. That is why we typically recommend an oral supplement. For those individuals that have difficulty remembering to take vitamins or supplements in general, intramuscular vitamin D3 injections have been shown to significantly raise levels in deficient adults for up to 12 weeks, negating the need for daily supplementation during that time.

Vitamin D is no doubt an especially important micronutrient that has sadly not been given enough attention. At least 70% of the US population could greatly benefit from increasing their vitamin D levels via supplementation or whole food nutrition. Many micronutrient deficiencies can go years without being discovered, don’t let the 1000+ genes regulated by vitamin D be ignored!