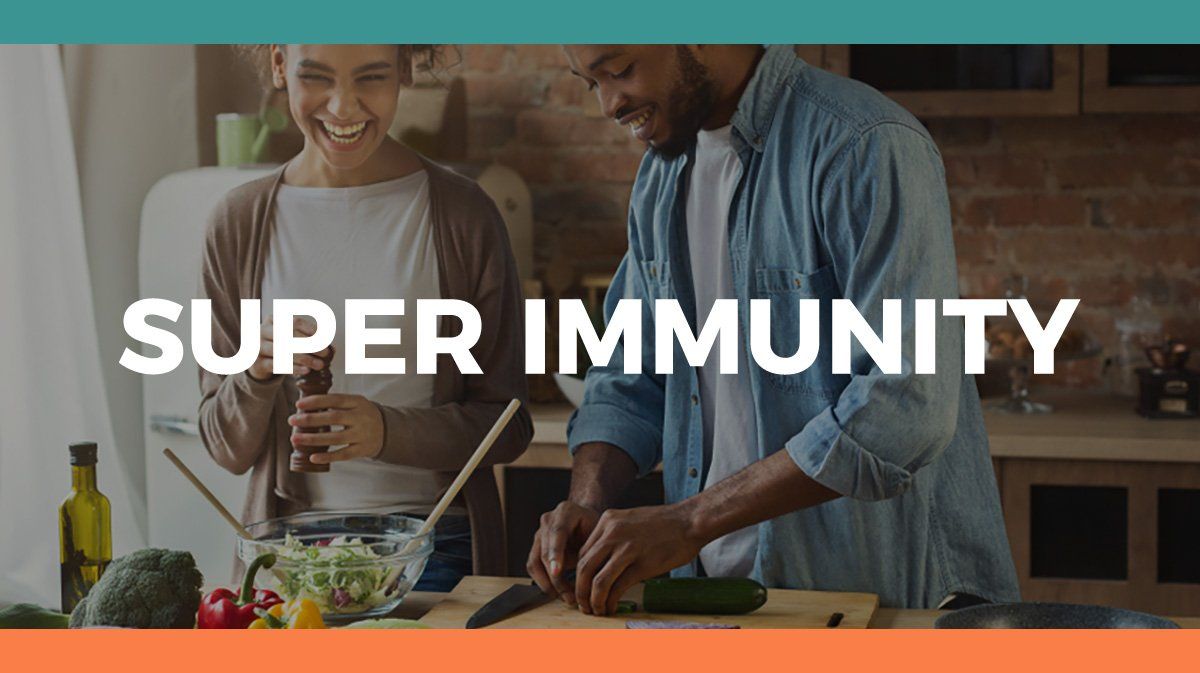 There is so much that the average person can do on a daily basis to help (or at least not hurt) their immune system’s ability to function.

Besides being incredibly important for overall health, eating a diet full of whole foods that are brimming with micronutrients is especially important if you want to ensure you are enabling the never ending pile of work that goes on behind the scenes to keep you healthy and happy. These micronutrients that we speak so highly of, are becoming increasingly scarce in the average American’s diet and there are real, measurable consequences if you burn through your supplies. While full-blown micronutrient deficiencies are relatively rare in countries like the United States (researchers report that 31% of the population is deficient in at least one micronutrient), individuals experiencing micronutrient inadequacies is another story.

Investigations have suggested that a significant portion of the population isn’t getting enough Vitamin D (come on now, it’s usually free!), more than 80% of us don’t get enough of the heavy-hitter Vitamin E, and almost 40% can be considered low on Vitamin C intake – each of these are pretty crucial to proper immune function, by the way. It is safe to say that there is at least a chance that you are unknowingly included in one of these stats, or you’re somewhere in the crowds of others that are lacking in any one of many other micronutrients that are often absent from the average person’s diet. This is exactly why a winning strategy includes lifestyle changes that are reinforced with supplementation either orally, intravenously, transdermally, sublingually, or any other effective way to get your levels back up to normal and support the countless processes that are occurring at any given second within us.

If you haven’t been accruing enough of some of the key materials needed to maintain a dynamic, resilient, and overall healthy immune system, supplementation is an effective means to jump start the process of helping you avoid further depleting your stores. That is why our Super Immune IV therapy includes specific micronutrients, antioxidants, and other components to enable your body to develop and maintain a robust immune system that acts swiftly, intelligently, and appropriately – all characteristics needed for optimal health and longevity. Our immune IV therapy harnesses the functions and capabilities of ingredients like:

Each of these can help you develop your defenses against foreign invaders, disease, and dysfunction. Each ingredient has a unique purpose and function to fulfill, starting with arguably one of the most important minerals for immune function – zinc.

Keeping the right balance of zinc in your body is absolutely imperative for the proper functioning of your immune system.

Unfortunately, a zinc deficiency/inadequacy is rather common, affecting up to an estimated 2 billion people worldwide. According to a research article published in the journal Nutrients, zinc has both anti-inflammatory and antioxidant properties, it is involved in the intracellular communication going on within certain immune cells, and your body requires it to defend itself against pathogens. These same researchers from the Institute of Immunology in Germany went so far as to declare that zinc should be considered a “gatekeeper for the immune system” and they determined that there are clear benefits to zinc supplementation if you have a malfunctioning immune system.

By now everyone should have heard about the importance of B12 for the complex process of energy production, making and maintaining healthy blood, and supporting nerve health – but those aren’t the specific benefits we are currently interested in.

Vitamin B12 (methylcobalamin is a naturally occurring form of B12) also plays a crucial role in the functioning of the immune system. Experiencing a B12 deficiency can result in a decreased number of lymphocytes (immune cells), and especially natural killer cells which are instrumental in our defense against viral infections. B12 is used for so many different roles by the body, and the estimated 40% of the population who are deficient in this vitamin will inevitably experience some degree of dysfunction in their physiology eventually.

B Vitamins play countless roles throughout your entire body.

Besides just facilitating cellular energy production, these B vitamins are required to repair DNA, create some hormones and neurotransmitters, and a whole lot else. Not getting enough of one or all of this class of vitamins can drop you into a state of chronic fatigue, anemia, or even compromise your immune system depending upon which one of the individual nutrients you are missing and how badly they are lacking.

Lysine is an essential amino acid that is an absolute must for proper growth, the production of valuable proteins, and has other side jobs all around the body.

Interestingly, lysine is able to have profound antiviral effects by blocking arginine activity and having enough of this amino on board is also crucial for keeping up the production of hormones, enzymes, and antibodies.

Magnesium is used for over 300 biochemical reactions in the body – so even simply based on that fact it is safe to say that it is pretty important.

Magnesium also works to help maintain normal muscle and nerve function, facilitates energy creation and usage at the cellular level, and on top of all that it supports a healthy immune system. This awesome mineral is also involved in both the adaptive immune response (focused on responseding to specific invaders), and the innate immune response (doesn’t discriminate). Magnesium is just absolutely critical for surviving everyday life, let alone creating an optimal immune system.

These trace minerals are used by your body to create hundreds of enzymes, enable many biochemical reactions, and do a bunch more behind the scenes. Trace (meaning you only need them in small amounts) doesn’t at all mean they aren’t important. If you are low on copper for example, you are going to be at an increased risk of infection because of a decreased ability to responsd by cells that create antibodies. Low on iron? You can bet your immune cells will have difficulty spreading out and just as much difficulty killing off invaders.

In many ways Vitamin C actually does live up to some of the hype, and it definitely has the ability to make a significant impact on immune function – good and bad.

In fact, Vitamin C contributes to your immune defense on various levels. From supporting our epithelial barrier (skin) to enhancing the immune response to pathogens, C is widely considered to be a key regulator of immune function, cellular growth, and proliferation. If you are chronically stressed, sick, or just under-nourished, it is highly likely you will be burning through your C stores incredibly fast. Fortunately, intravenous Vitamin C has been consistently proven to be especially effective at saturating your body with this crucial nutrient.

Here is another ingredient that should be expected in any protocol meant to support the immune system and improve overall health.

Glutathione is an absolute expert at preventing cellular damage and eliminating all kinds of reactive molecules. The intricate and ever-changing balance that is struck within our body’s between endogenous (made within us) antioxidants like glutathione, and pro-inflammatory molecules is part of what regulates the innate immune response, according to a review published in the journal International Journal of General Medicine. Not only does glutathione play a primary role in managing this balance, but there are many pathological conditions directly associated with a deficiency in this anti-oxidizing, free-radical scavenging, and detox-ifying compound.

Some amino acids are more important than others, and in this context, these three are among the most important.

Arginine and it’s precursor citrulline are vital for the initiation of the immune response, and maintaining levels of arginine is considered to be vital while experiencing profound inflammation and sepsis. Ornithine, in a similar fashion, has been consistently linked by research to expedite wound healing and facilitate recovery.

Regular old baking soda is used to fight heartburn, squelch UTIs, and boost exercise performance (but it can also cause some real GI distress), along with quite a few other little-known purposes. It is also often called upon to neutralize certain poisons once they’ve been ingested and it is incredibly effective at helping your body rid itself of some select toxins. Strange, that the little box of powder we all have in our fridge is one of the most effective tools for enhancing exercise performance and reducing acidity in the blood.

Unfortunately, pounding back a glass full baking soda to improve your workouts will likely bring some intense GI discomfort – not the case with an IV, however.

There is a lot that goes into developing and maintaining a thriving and balanced immune system, and nutrition is just one aspect of a solid wellness plan.

At Ikon Health, we offer our Super Immune IV to improve potential nutritional shortfalls by focusing on some key vitamins, minerals, and amino acids. If you are lacking in any of these key nutrients, your immune system will be placed at a major disadvantage and the degree to which it will impact you as a unique individual isn’t always known. Supporting your immune system goes beyond just filling up any holes, it can also mean kicking it up a notch. With some nutrients, like Vitamin C, higher dosages have been shown to have increased benefits, in some situations. Our immune system is always working (especially at night) and it needs certain resources more than others – the Super Immune IV focuses entirely on those resources.

Incorporating IV therapy can be part of an effective wellness plan that includes plenty of sleep, movement, stress management tactics, and of course…whole food nutrition.